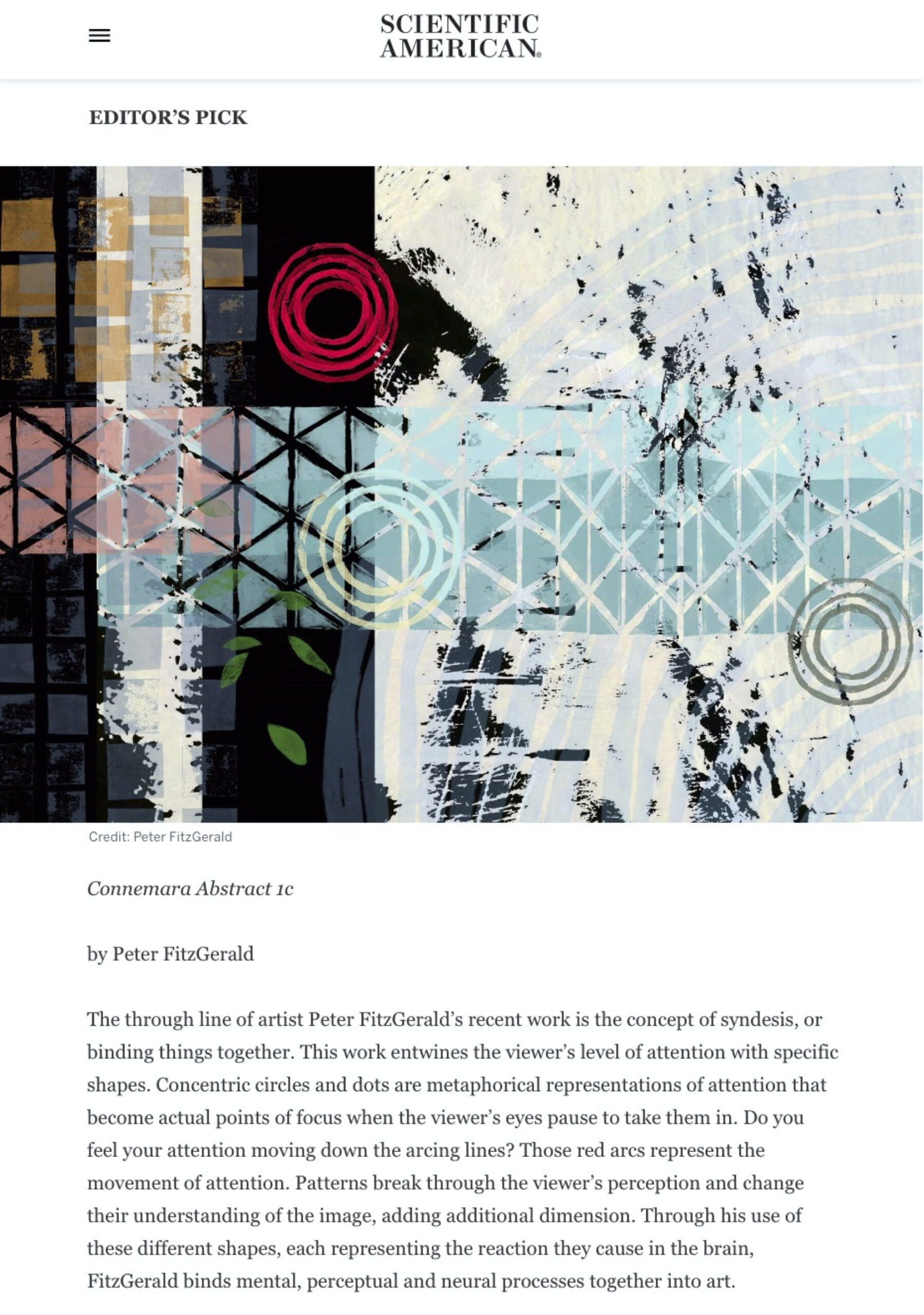 Very pleased to have been included among the ‘Editor’s Picks’ on the Scientific American website, August 2022; more here.

Much of my recent practice involves the use of pictorial components that work syndetically (syndesis: ‘binding together’). A non-art example of syndesis may help. Anyone who thinks the word euphonia (late Latin) sounds nice is experiencing a conjoining of meaning and sound, a sort of second-level onomatopoeia. That same person may enter a meta state, reflecting on this conjoining, and even a meta-meta state in which they reflect on their attention to their own thoughts.

I am very interested in exploring, through use of visual imagery, this sort of hierarchical linking and binding of neuro-cognitive states – from the elements in an artwork right on up.

There are three very basic imagistic tokens I’m using repeatedly –  concentric circles to represent points of attention; dots for the same purpose; and a curved line to represent the trajectory of (moving) attention. Anyone actively looking at a set of these concentric circles, for example, is (assuming that they are not distracted) attending to a representation of their attending; if they notice themselves attending, there is a further binding or conjoining of mental / perceptual / neural processes, one level up.

Most of the artworks also involve pictorial components that could be thought of as ‘syndesis-adjacent’, to use an awkward term. The use of pattern, for example. For a start, there is an immediate binding: pattern and surface are inevitably conjoined – in a print, in a painting, etc. There is also a low-level way in which external pattern in the artwork meets internal pattern-processing at neural levels, but the way pattern works at higher perceptual and cognitive levels is more interesting. Pattern often causes a break between two- and three-dimensional understanding of an image, and there seems to be something happening between ‘two of something’ → two objects, and ‘three of something’ → a pattern.

There is also a great deal to analyse in many other areas / effects, such as depth, blur, rupture, occlusion, natural forms, human figures, faces, rotation, composition, balance, analogy, ambiguity, metaphor… Just some of these have so far found their way into my artworks. The last of these, metaphor, hints at the treasure trove to be explored; for example, some images here use the almost-bare branches of trees as an echo of the dendritic (dendron: ‘tree’) branching of neurons … and this sentence itself contains multiple metaphors, suggesting syndesis throughout cognition.

I feel that it is important that the artworks I make are potential prints on paper; to be part of the experience of art as physical things, they should not just be virtual. For this reason, I offer them as limited-edition prints that can exist in the commonest art venues – homes and galleries.

I believe we may be able to create a lingua franca of pictorial approaches / elements that function in a syndesis-like manner and which are credible equally as art and as a tractable approach for cognitive sciences. We’d no longer be talking past each other.

There’s an allied hope: if the cognitive sciences can get a better handle on the arts, these self-insights may change the way we make art. And it is important, possibly urgent, to understand what happens when we make or consume art. Why? AI, among other things. Who will set the agenda of what the arts are, as AI-generated arts becomes more and more convincing? If there was ever any doubt, 2022 has shown definitively how we sleepwalk ourselves into disaster. With art, we need to understand what we’re doing.